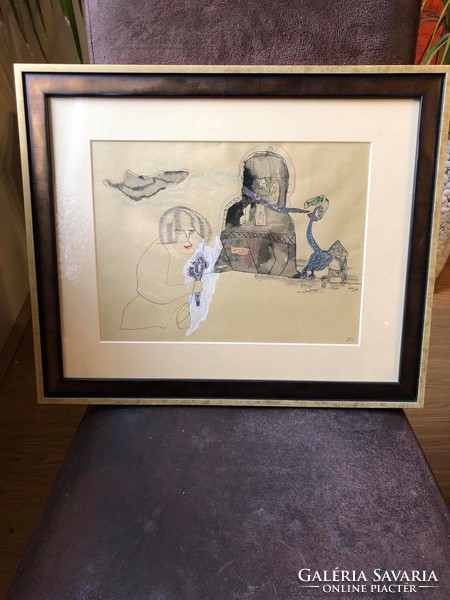 The seller has set the artwork as original and offers 30 days money back guarantee. Seller notes that the originality was confirmed by an expert.
Item descriptionShipping and payment
Seller may have used machine translator (e.g. Google Translate) to present this item in English. See original

The artist and filmmaker was the fine artistic name of the lexis-lisians and the alexio del fabro artistic name,

He marked his works with the sign xi or, lexi.

He was born in Pécs on December 30, 1939. His parents were lychees elek chief servant and gera edit. He graduated from the Lajos Nagy grammar school in Pécs in 1958, and then obtained his diploma at the Pécs Synagogue Academy (Antal Németh) in 1960.
In. He has worked as a caretaker for Hungarian television since 1961, and as an exhibition director and graphic artist for the fine art publishing company. He was a designer and then director at the Pannonia Film Studio from 1970 to 1997. Artistic director of the taller and tarsa studio and the lexy art studio in Budapest since 1993. He has been painting, drawing since 1961, organizing solo exhibitions since 1965 and participating in group exhibitions. He has also been involved in film directing since the 1970s. He spends his summers on a ferry, where several of his exhibitions have been on display. His artistic work was recognized in 1983 with an award for socialist culture, and in 1988 with a praise from the Ministry of Culture. Major film slides: splindreluv
Mlyn i. Dij. West Berlin prix itb. Thessaloniki is a member of the jury, a special prize in Tehran, a commercial and information film festival iii. Dij. Varna, film and TV critics award. Bp., Diplomas, diplomas bilbao, tampere, melbourne etc.
Major exhibitions: Pál Petrigalla Salon, bp. 1965, No. 1. Group Exhibit, bp. 1970,
Le journal performance weores sandorral, bp. 1979, Film drawings and illustrations,
Bp. 1980, Hommage a franz kafka, bp., 1986, West Berlin, 1987, Impressions, bp. 1990,

Exhibition of his latest oeuvre:

Külföldi szállítás
If you have any questions, ask the seller.
Report this item
Ad