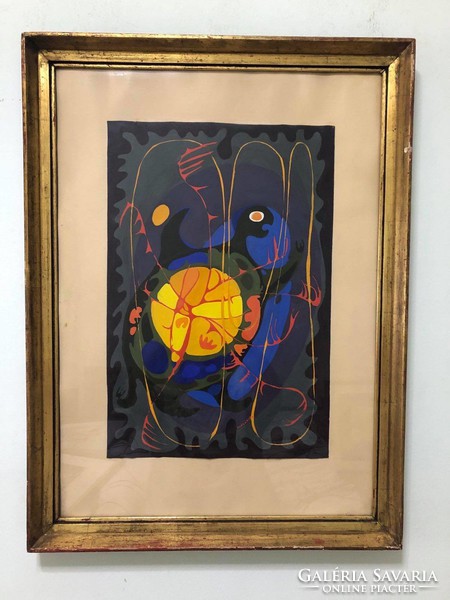 Unfortunately, the reflections could not be eliminated!

He studied at the painting school of József Pandur in Győr, then at Leo Békéssy. 1928–1933: Hungarian College of Fine Arts, master: Gyula Rudnay; 1933–1934: student of László Kandó. He was a stage designer of the comedy opera in the chamber hall of the Academy of Music between 1947 and 1948, and then after his dissolution he made a living from applied graphic works: he organized exhibitions of art, archeology, ethnography, literature, music and technical history. In the course of these works, he deepened and expanded his knowledge of prehistoric civilization, the culture of ancient, African, and oceanic natural peoples, whose fertilizing effects gradually manifested themselves in his art. In addition, its unique symbol system and unique form of expression were shaped by philosophical, literary and musical experiences, nature observations, and the complex influence of folk art. The direct inspiration for his expressive-surreal abstraction is nature, flora and fauna, ancient myths. Between 1958 and 1969 he was a drawing teacher in Budapest. At the exhibition of pedagogical artists in the capital, in 1972 he was awarded the level of the Ministry of Culture, in 1977 the level of the Szeged summer exhibition, in 1978 the silver degree of the work, and in 1979 the Hungarian Painting Day. He went on study trips to France, Germany and Italy, the Netherlands and Yugoslavia. While in the 50s he painted watercolors and naturalistic pictures of Lake Balaton, by the early 60s his individual, “lyrical surrealist” picturesque world had developed. His special technique is egg tempera, which he mostly applied to paper, fiberboard and canvas. Experimented with faience tiles, wood inlay and glass window designs. He made linoleum engravings and also wrote poems. His non-figurative images explore the “root of things, the essence of being,” reflecting “spiritual motives, reality”. Mineral, plant motifs and elements of the fauna are mixed in their specific symbolism with geometric, organic, grotesque shapes (eggs, spirals, turtles, keys, chairs, etc.). He worked in pure colors. His inner worldview is related to the poetic world of Alexander Weöres, to whom he has been friends since his youth. His artist friends who turned up in his studio were inspired by his works: several poems and musical works were created under the influence of the artist and his works. Many of his works have been chosen as illustrations for volumes of poetry for the covers of records. He made set and costume designs for Alexander Weöres’s song play, “Tyunkankuru”. He also illustrated literary works and children's books.