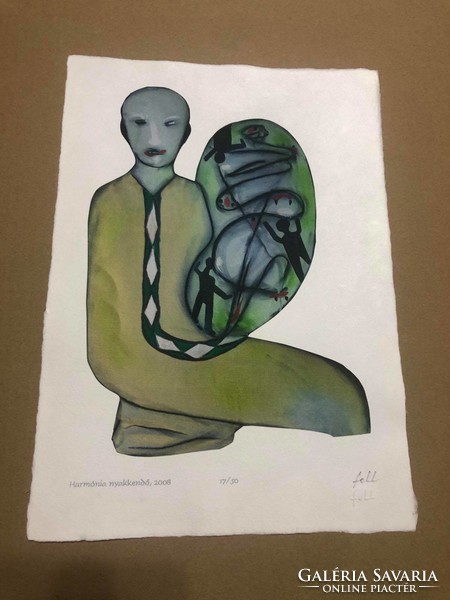 Made in 2009 in Szentendre vinczemill paper dipping workshop.

The one I advertised on 17.Db. See plate in the middle!

Graphic artist, artist, performer, musician. He studied photography for the first time. Before
He worked in Kecskemét, influenced his painting. Later
He is a founding member of the Vojvodina Lajos studio in Szentendre and in Szentendre
For a graphic workshop. 1980-1986 Between the a. E. Member of the Commission Band,
Then he founded his own band called Batu Carmen. 1990- Ben
He received the Munkácsy Prize, the prize of the neufeld anna foundation, the hincz
Gyula Memorial Award, in 1999 the Miskolc Winter Exhibition Award. Versatile
Artist. He creates graphics, paintings, collages and uses photos
For his works, he makes video films. Associates the various branches of art, the
Fine arts, music and poetry. Exhibitor since the 1970s
He is an artist and a regular participant in group exhibitions in Szentendre.
In 2002, he appeared in the art hall, the jubilee of the voivode lajos studio
At the exhibition. His works in the Hungarian public collection are, for example, the Hungarian national
They can be found in the gallery. His public work Cheerful Totem in Szentendre
Visible.

Külföldi szállítás
If you have any questions, ask the seller.
Report this item
Ad